Skiving cutters are used in the production of gear wheels. When producing gear wheels, the desired geometry is achieved by a process known as gear skiving, which combines the two traditional processes of gear hobbing and gear shaping. Skiving offers a high degree of productivity and flexibility, and compensates for the drawbacks of the two traditional processes. Compared to gear shaping, gear skiving significantly reduces processing time. With gear skiving, the axes of the workpiece and tool are not parallel but intersect at an angle. Productivity is proportional to the angle of intersection. When the tool rolls off the workpiece, the relative movement created by this angle is used to achieve the cutting speed. The high relative speeds place great demands on the machine technology used and the spindles of the tool and the workpiece must be synchronized. As an industrial application, skiving has been used for more than a century, but it has taken the development of stable and fully synchronized machines to realize its full potential. Surface treatment is essential to enhance the precision and durability demanded of modern skiving cutters and make the process more efficient. 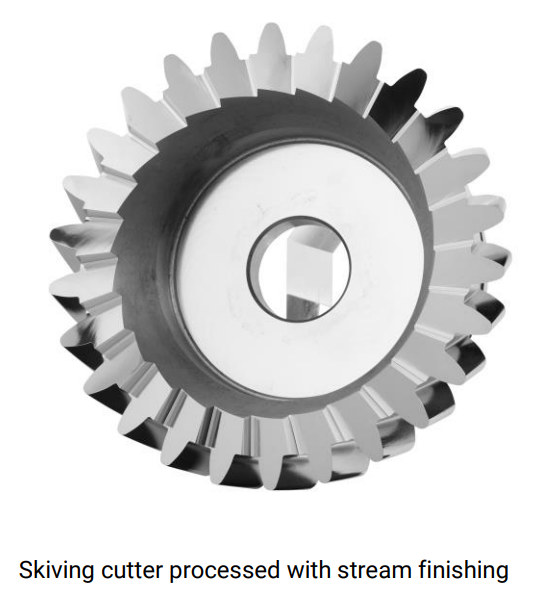 With its stream finishing process, OTEC offers a machine solution for the surface treatment of skiving cutters. The skiving cutters are clamped in the machine and lowered into a container filled with abrasive. Processing is carried out by both the rotation of the container and the movement of the workpiece in the media flow. Processing can be precisely aligned to specific points on the workpiece. The intensive forces generated by OTEC’s stream finishing machines enable perfect results even in hard-to-reach places. Polishing and rounding of gear wheels in the stream finishing machine usually takes only a few minutes.

OTEC’s stream finishing process saves an enormous amount of time compared to conventional processes like blasting. By making the cutting edge uniform and reducing chipping, the service life of the tool can also be greatly extended in most cases. Surface processing focuses on low chipping and a uniform rounding of the tooth heads and edges. Polishing and smoothing the cutting surfaces in the tooth profile allows chips to flow off better during gear wheel production. The smooth surface also significantly improves the coating adhesion of carbide layers to be applied.

Contact us to learn more or request sample processing.