There are numerous methods and processes available for post processing industrially manufactured metal components, with various advantages and drawbacks depending on the size, geometry, material and finishing requirements. Below we’ll compare several established processes for finishing gear wheels and assess them in terms of health and safety, environmental impact and cost-effectiveness.

END_OF_DOCUMENT_TOKEN_TO_BE_REPLACED

Skiving cutters are used in the production of gear wheels. When producing gear wheels, the desired geometry is achieved by a process known as gear skiving, which combines the two traditional processes of gear hobbing and gear shaping. Skiving offers a high degree of productivity and flexibility, and compensates for the drawbacks of the two traditional processes. Compared to gear shaping, gear skiving significantly reduces processing time. With gear skiving, the axes of the workpiece and tool are not parallel but intersect at an angle. Productivity is proportional to the angle of intersection. When the tool rolls off the workpiece, the relative movement created by this angle is used to achieve the cutting speed. The high relative speeds place great demands on the machine technology used and the spindles of the tool and the workpiece must be synchronized. As an industrial application, skiving has been used for more than a century, but it has taken the development of stable and fully synchronized machines to realize its full potential. Surface treatment is essential to enhance the precision and durability demanded of modern skiving cutters and make the process more efficient.

END_OF_DOCUMENT_TOKEN_TO_BE_REPLACED

OTEC’s compact electropolishing machine the EPAG-Smart is capable of perfectly smoothing and polishing dental parts in just one step. It’s able to remove the smallest of scratch marks and waviness in a repeatable process without compromising tolerances or geometries.

Contact us today to request sample processing of your dental parts.

During the manufacturing of metal workpieces it’s often necessary to machine threads. Usually when workpieces have to be mounted or assembled to other parts, screw connections are unavoidable. Generally, there are two different ways to create threads: cutting (‘taps’), which is the most popular method, and forming (‘forming tools’).

OTEC has developed several surface finishing processes of threading tools. With OTEC’s stream finishing machines with Pulsfinish, OTEC’s pulse drive, the tools can be processed reliably, quickly and economically according to the tools’ requirements. The principle of pulse finishing system is based on the precisely defined and rapidly repeating relative movement between media and workpiece. Here the clamped workpiece is immersed in the media stream of the rotating drum where it is quickly accelerated to a speed of over 2,000 rpm. Then it is decelerated and accelerated once again. The differing speeds resulting from the inertia of the media in the drum and the rapid change of workpiece speed give rise to an extremely intense and precisely controllable abrasive effect.

Compared to conventional processing methods, OTEC’s pulse finishing process has far fewer steps. Deburring, smoothing and rounding of the edges all happens in one step, which leads to both time and cost savings. A surface treated with the OTEC process also improves the adhesion of the subsequent coatings and extends the tool life.

When dealing with cutting tools, taps generally need a deburring process after tool grinding. With the conventional brushing method, all burrs can never be removed, which negatively affects the later coating process. Non-removed burrs break off and create uncoated areas that wear more quickly. With OTEC’s stream finishing machines with pulse drive (Pulsfinish), workpieces can be deburred within several seconds to several minutes.

Cutting edges can be rounded to a defined measurement. By setting the parameters container and workpiece rotation speed as well as the immersion angles the geometry of the taps can be modified in order to match the requested and optimal shape.

When processing forming tools, the main task is to evenly smoothen the entire tool surface. A smooth surface reduces the formation of material in the forming grooves and reduces the friction between the tool and the material to be deformed. Depending on the requirements, the defined rounding of certain functional edges is also necessary. By using a surface finishing process developed by OTEC, it’s possible to achieve these requirements. Compared to competing processes like shot blasting, the OTEC process is both cost effective and at the same time quite flexible, as it can be adapted to different workpiece shapes. Using this finishing process, the deformation forces can be reduced by about 60%. 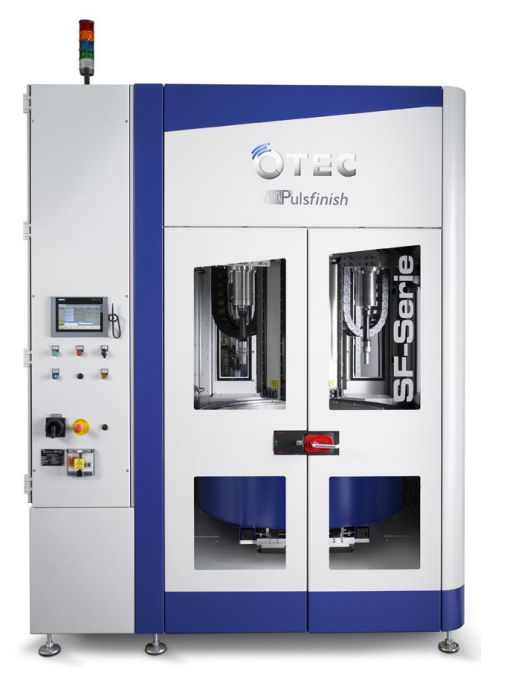 OTEC’s stream finishing machines with pulse drive (Pulsfinish) make it possible to work with high energy and small and abrasive media. The finishing target is achieved in about one to two minutes, depending on the size of the tap and the requested result. The media used is also smoothing the surface of the tools, which improves the coating behavior and tool life. The process is very flexible and adapts to every dimension and shape of taps. OTEC’s stream finishing machines are highly cost effective since the wearing of the media used is low and additionally, a single machine is able to process a large number of workpieces at the same time.

Contact us today to request sample processing for your threading tools.

Cutter bodies such as drilling, milling and rotary bodies are used for machining processes and serve as holders for inserts. Cutter bodies are available in different lengths and shapes and are manufactured of hardenable steel from which the cutter body is first milled, then deburred, hardened and ground to size. Finally, the polishing or coating of the surface follows e.g. with hard chrome. The coating is intended to prevent corrosion, but is quickly removed by the chips produced during cutting.

The deburring and polishing of cutter bodies has usually been carried out by brushing or blasting. The results obtained using this method are often inconsistent and inaccurate. For instance, if the contact surface for the insert is not absolutely flat, it will have a negative impact on the cutting process itself. Additionally, non-removed burrs can affect the stability during the cutting process. With OTEC’s SF series of stream finishing machines, tool bodies can be perfectly deburred and polished with repeatable and reliable results. In contrast to manual machining, OTEC’s stream finishing machines deliver consistently perfect results. Depending on the initial quality and the size of the workpieces, the typical processing times for polishing are between five to eight minutes. Thanks to OTEC’s patented pulse finishing technology, it’s possible to reduce an initial roughness from Ra 0.2 – 0.5 µm to Ra 0.03 – 0.05 µm.

For surface processing, two main tasks are involved in the production of cutter bodies: Deburring after milling and polishing after hardening and grinding. The reliable removal of burrs is important for optimum fit of the inserts on the cutter body. A burr-free and flat support surface is important for stability during the cutting process and prevents chipping of the insert. The subsequent polish removes the oxide layer formed during hardening, thereby improving the visual appearance and upgrading the part for sale. The perfectly polished, smooth surface not only affects the appearance of the tool but also the functionality. Due to the polish, the surface is closed, compacted and significantly smoothed. The extreme smoothness offers less attack surface for corrosion and ensures a better chip flow in the flute. A specific surface treatment can thus significantly increase the efficiency of the cutter tool.

OTEC’s stream finishing machines can be used for a range of applications and industries but they offer unique advantages for the toolmaking industry, particularly for edge rounding on carbide tools. Edge rounding or honing carbide tools is a common process that helps extend tool life and improves PVD coating adhesion. Rounding and smoothing the cutting edges of a carbide tool minimizes the risk of microbreakage and also significantly increases mechanical stability.

Many companies have one process for all of their edge rounding needs, which doesn’t always provide the optimal results for all tools. Since professional, high-quality edge rounding depends on a host of factors including application area, material and geometry, using the same process for every tool provides inconsistent and less than optimal results. OTEC’s stream finishing machines allow you to develop custom processes tailored to each tool and then easily automate them.

In order to develop the best edge rounding process, it’s important to consider each tool and what it will be used for and under what production conditions. Each type of tool has its own specifications. In order to guarantee reliable, repeatable, high-quality and cost effective results, a custom process is necessary. As an added bonus, OTEC’s stream finishing machines also allow you to automate these custom processes.

The OTEC SF-1-ILS stream finishing machine is a flexible automated processing solution that you can quickly and reliably tailor to each tool. It allows for automatic retooling for different diameters, with a short process time and high output. With OTEC’s stream finishing machines,  heavy, homogenous rounding is attainable and generous immersion depth helps guarantee uniform processing.

Contact us today and we can develop a custom process for your needs.

Certain parts of the coin production process are frequently done manually, which can be time-consuming and also leads to inconsistent quality since the quality of the finish varies depending on the person working on it. OTEC’s drag finishing machines provide a reliable and cost-effective alternative to manual processing.

Contact us today and we can provide a comprehensive and customized processing plan for your needs.

OTEC’s new electropolishing unit, the EPAG-Smart, is perfect for smoothing and high gloss polishing of intricate jewelry. It can polish hard-to-reach inner contours without compromising intricate geometries. Combining reliable machine quality with high cost-effectiveness, the machine can be used to finish stone-set jewelry as well as cast and 3D-printed jewelry. This new generation of machine is also perfect for medium and small production runs.

Processing with the new EPAG-Smart is simple thanks to fast, easy container changes, which allow for faster electrolyte replacement for mechanical finishing of gold and silver. It also offers reproducible processes that are easy to program.
Contact us to learn more.